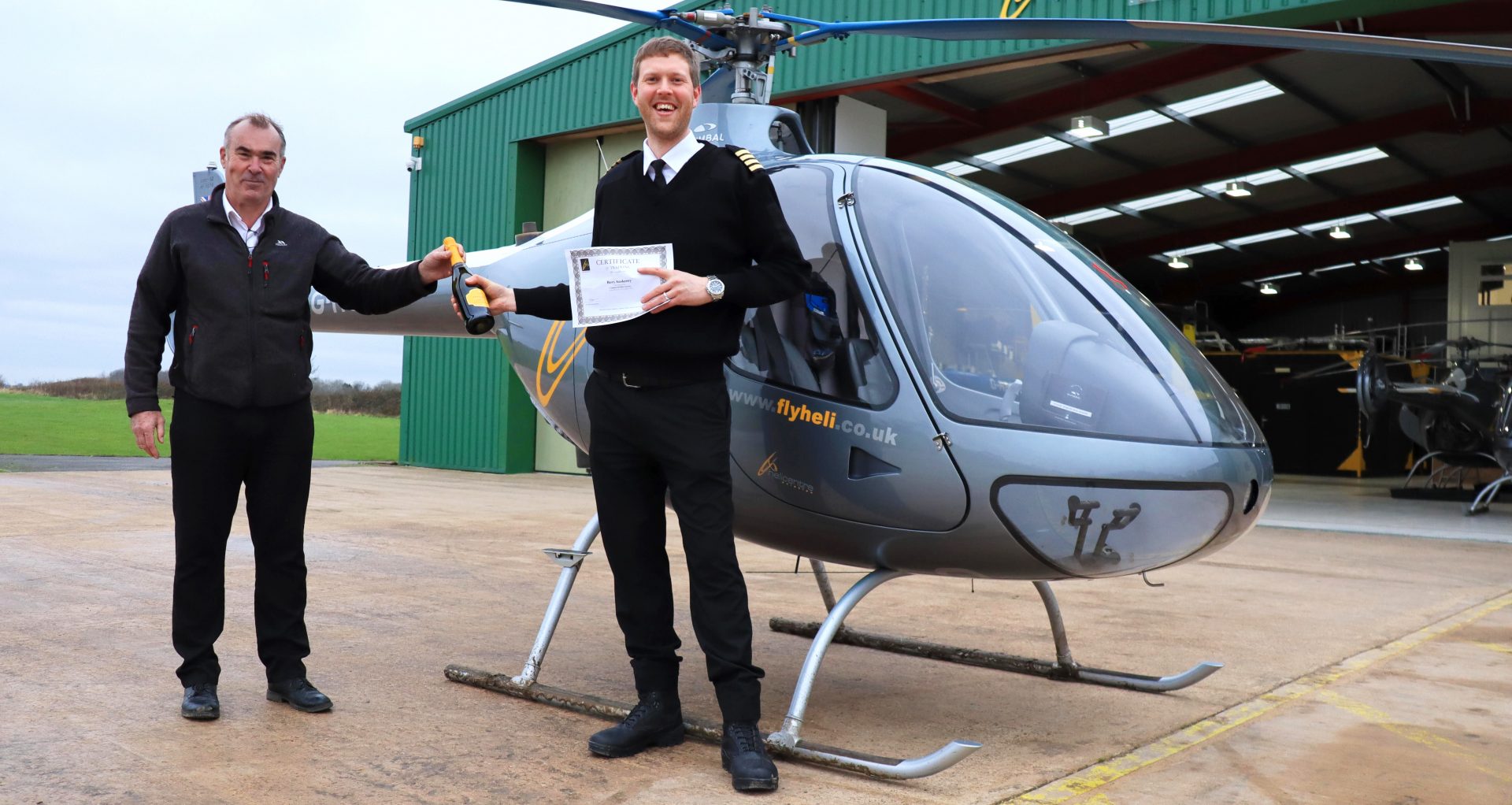 I know this will probably sound strange, but when I landed at the end of my CPL skill test I realised I had actually enjoyed the flight. For weeks beforehand I had been anxious about it. It’s a big deal – the culmination of months of hard work – not to mention the huge expense involved in getting here.

However, the key difference between the skill test and the ATPL exams is that you basically know what you’re going to be asked to do. The examiner needs to see you demonstrate a set routine of manoeuvres, procedures, techniques and skills over the course of the briefing, aircraft check and the flight itself. All these requirements are here in black and white for you to read over at your leisure.

My skill test took place on January 18th 2021 at Leicester Airfield. The examiner was Captain Ric Fox OBE, a hugely experienced ex-military helicopter pilot with over 12,000 hours on 32 types. On paper this could seem a little intimidating, but Ric was fantastic and put my course colleagues and I at ease immediately. We all got the distinct sense that while he was there to make sure we were safe, competent and worthy of a licence, he also wanted us to pass.

Another thing to remember is that your ATO won’t recommend you for a test until you are ready to pass. It’s in no one’s interest to see you fail so take confidence from the fact that the people who trained you have staked their reputation on the belief that you are totally capable of passing. 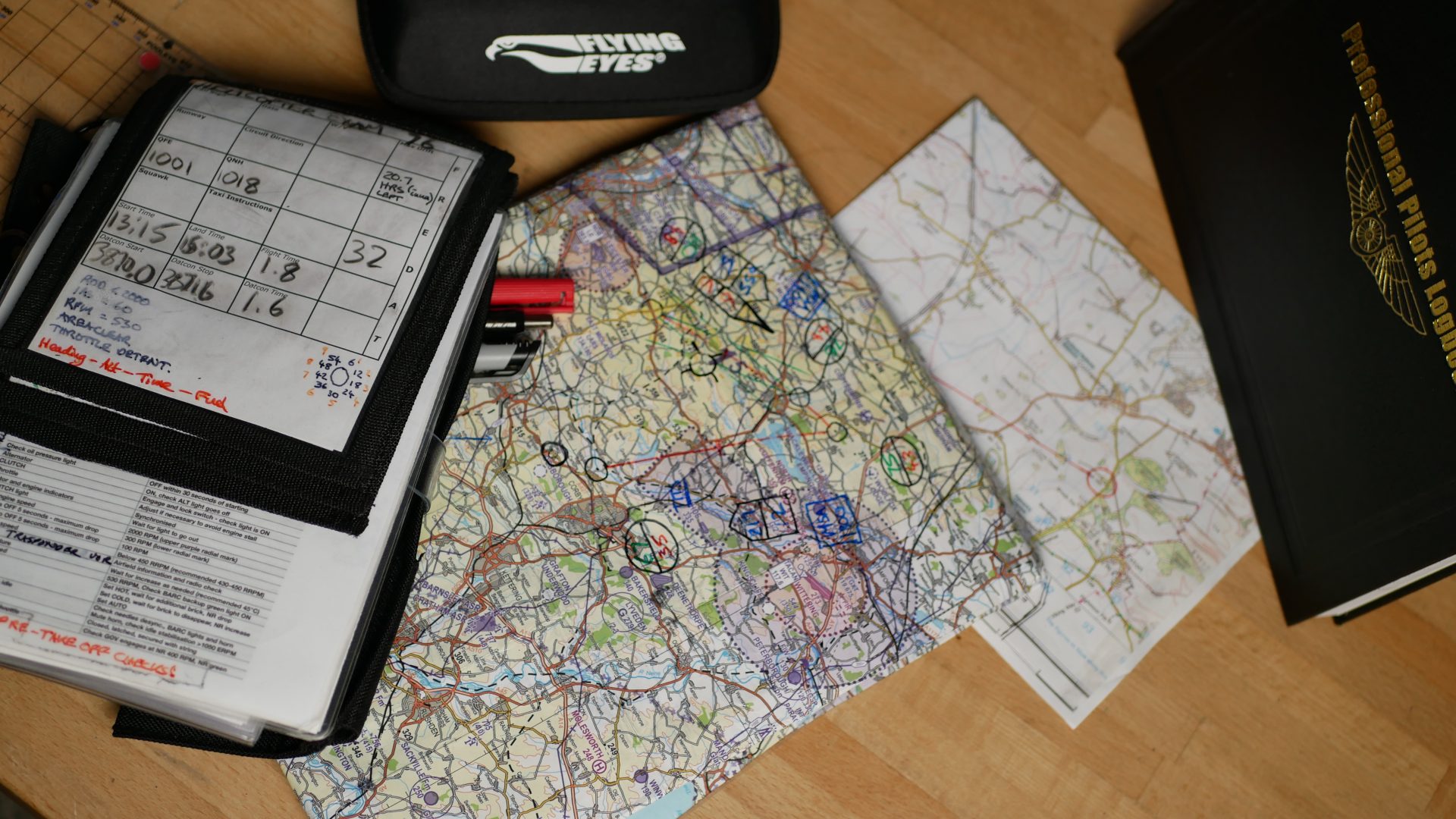 So what can you do to help ensure success? The answer, I think, lies in the preparation before hand and your mindset on the day. Let me expand on that, firstly the prep. I strongly suggest you read the relevant parts of the examiners handbook and the SRG2197 form which details each of the five parts that make up the test.

A couple of things to note from the handbook are that there is a list of all the examiners call signs. Knowing this in advance helps to show that you’ve done your research. It also explains in this document that the examiner knows you will be nervous and may not fly as well as you usually do because it’s a test. This doesn’t mean you’ll get away with murder but there is a degree of understanding which certainly made me feel better.

You’ll more than likely get an idea from your instructor as to what geographical area the examiner is likely to conduct the test in with reference to your own local airspace. The examiner needs to see you deal with controlled airspace but they won’t want your navigation section to be messed up because you couldn’t get permission from ATC so it’s a balance. You should be able to rehearse likely test routes with your flying instructor before the weeks leading up to the test. 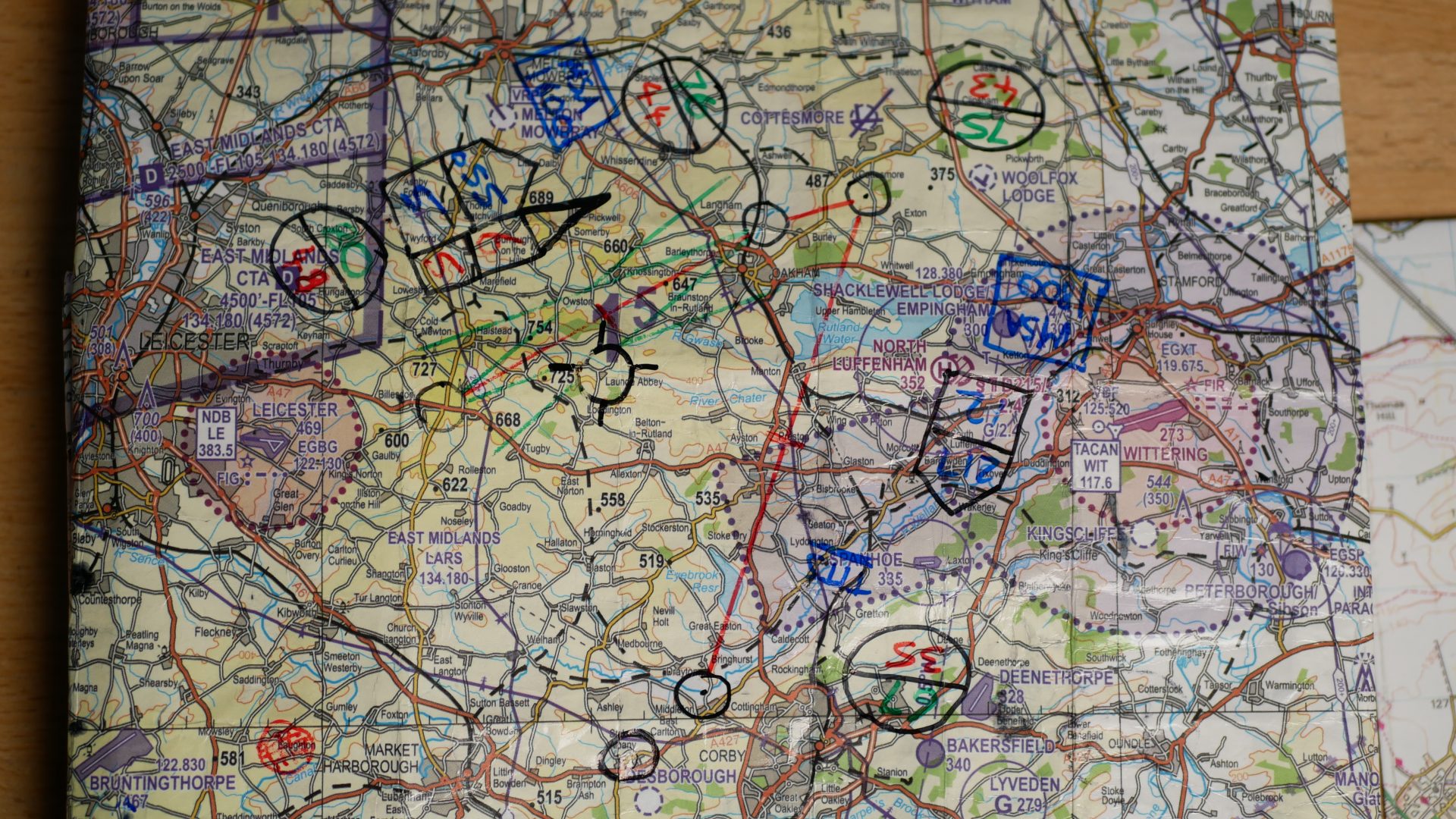 The night before the test I looked at the relevant TAFs when they updated at teatime. I would then make a decision as to whether I thought it was weather to fly the next day and then call the examiner to confirm.

While the examiner can obviously override your ‘go’ decision, they won’t make you go if you’re not happy and it’s up to you to make the call – just as it will be once you’re a licensed commercial pilot. Make sure your chart and PLOG are both clean and ready to be used and get across the weather ‘big picture’ as well. 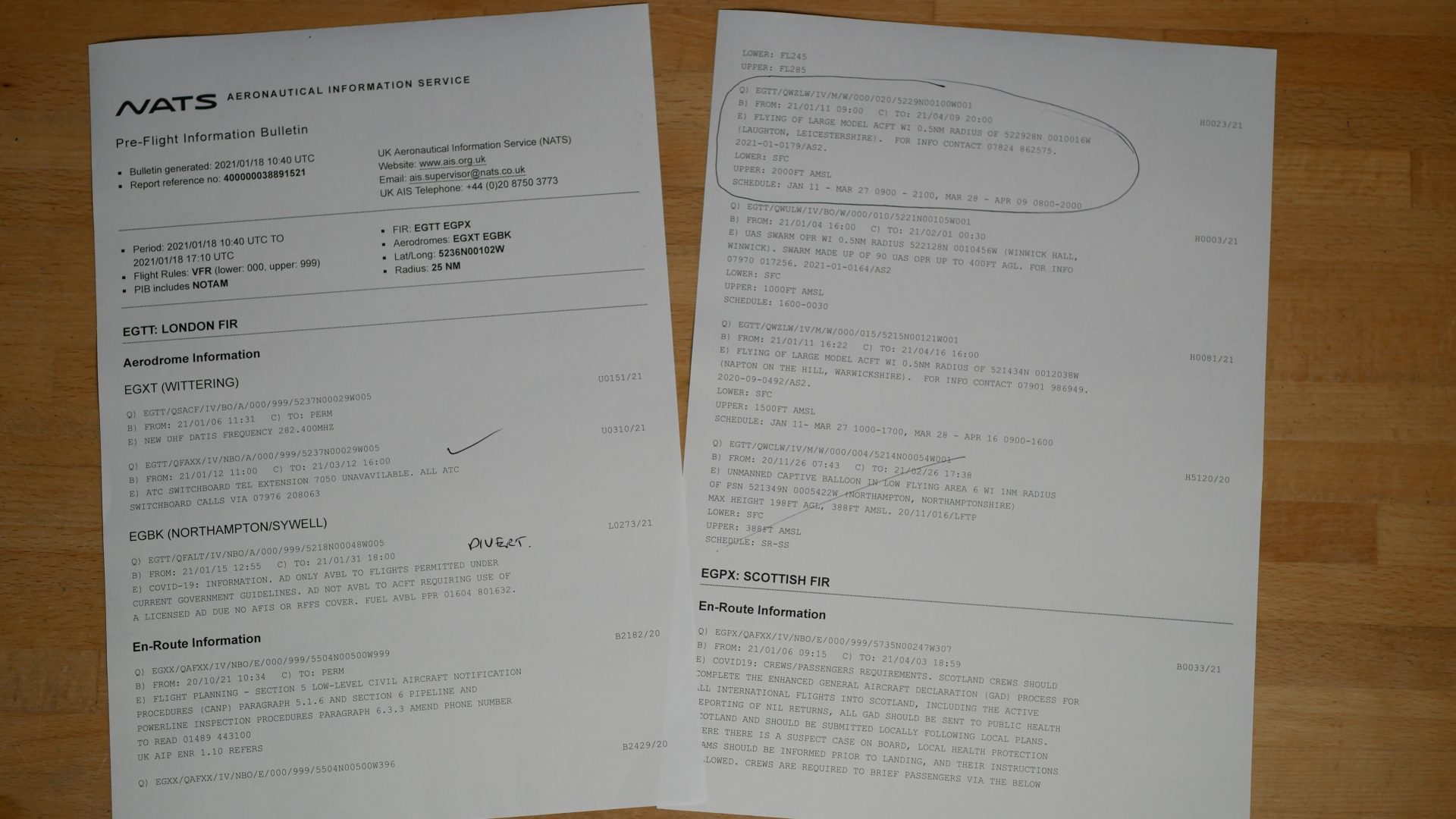 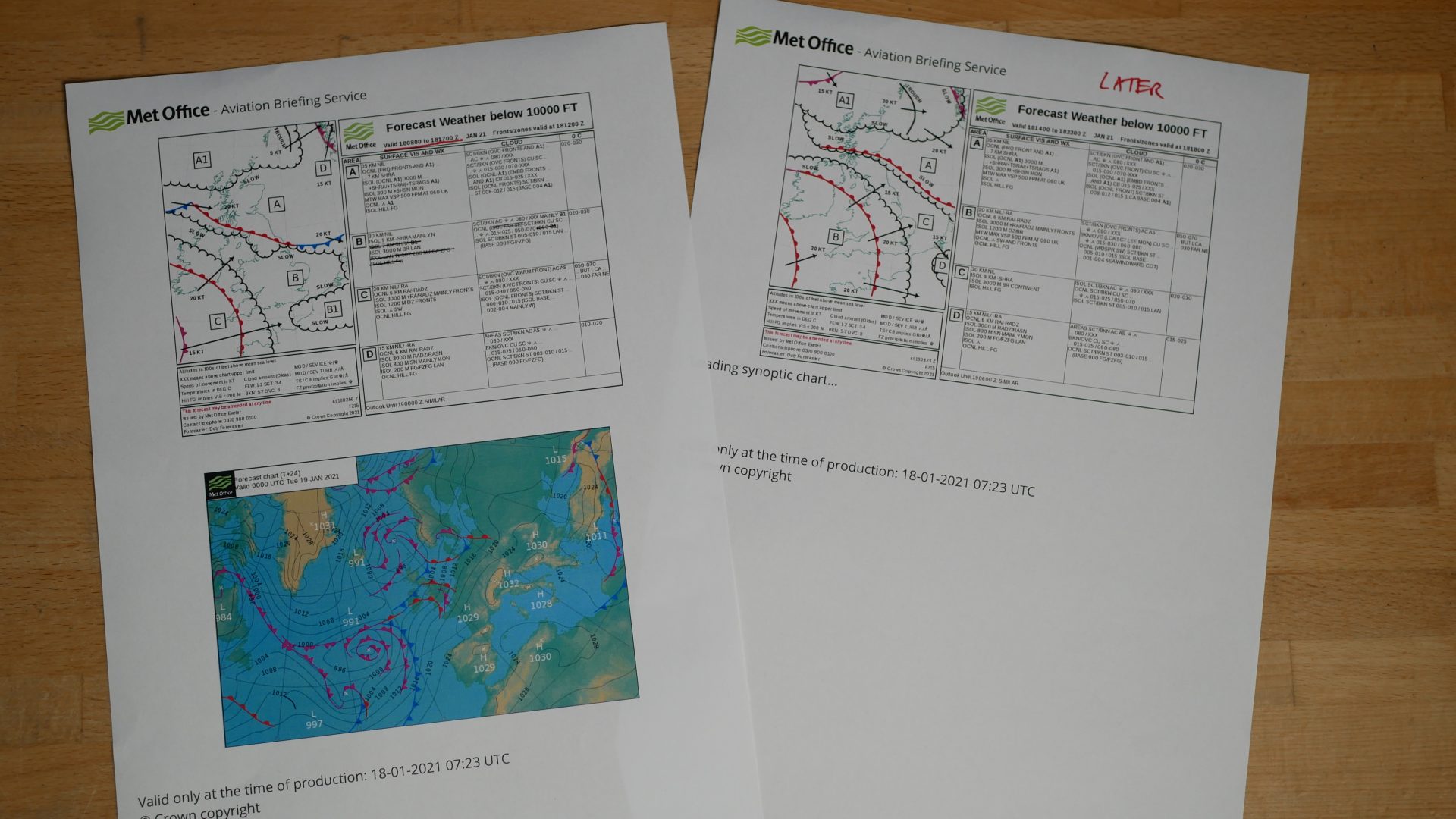 On the day of the test I got my head into the detail of the weather situation, checked the aircraft technical logs and paperwork to make sure it was serviceable and checked the NOTAMs. You may find it helpful to print off the Met form 215 and NOTAMs so you can highlight the relevant bits on paper.

You will have a briefing where the examiner will go over the format and running order of the test. The examiner will also make it clear who’s responsible for what; during real emergencies and rolling the throttle into the detent during the engine off to the ground manoeuvre for example. The examiner will give you your route and you’ll be given a quiet space and an hour to complete your planning. Each school has a slightly different way of teaching this in my experience but just do it like you have been taught to and double check everything if you can.

On that, I have been trained by instructors at Helicentre Aviation at Leicester airfield as one of 8 guys on their first integrated CPL course, which started in October 2019. It’s a common saying; “Train hard, test easy” and I think there’s a lot of truth in that. I’m fortunate that we all had superb instructors teaching us but we also put a lot of work in ourselves too. Combined, these elements both made a huge impact on not only on our test outcomes, but also on how we felt as we flew them.

Anyway, I digress. With your planning done, you’ll then walk through your MATED brief with the examiner, discussing the synoptic weather charts, form 214 and 215, TAFs and METARs. I then went through the aircraft documents again, all the while verbalising what I was checking. Next was the weight and balance check, the applicable NOTAMs and anything relevant on the AIS information line.

I then moved onto the route and discussed my plan for departing the airfield, the route itself noting any threats and which air traffic service I was going to talk to on the radio. I discussed my fuel planning and contingencies for a diversion, should it be required.

Once the examiner and I were both happy we signed the tech log and made our way to the aircraft. I carried out a check of the helicopter and he asked me some questions about various parts of it to ensure my technical knowledge was up to scratch.
Checks done we climbed in and I began the start-up procedure. Ric reiterated that he wanted me to conduct everything as I normally would. He also reassured me that just because he wasn’t chatting didn’t mean he wasn’t happy – he was just keeping quiet to allow me to concentrate on the job in hand, which was great.

You and your instructor will have already flown all the manoeuvres many times and you should now be able to do them consistently to a good standard. I knew that by the time I sat this flight test, my biggest enemy was not the test itself, but my own nerves. If you can keep calm, focussed and fly the way you do with your instructor you will be much more likely to pass. As far as I can tell, part of the test is to see how well you operate as a captain in sole charge of an aircraft with passengers onboard. No one wants to be flown around by a nervous wreck dripping sweat into their pilot shirt, do they!

Some parts of my test went really well while some elements were not my best work. I managed to maintain good accuracy during the navigation section and I did reasonably well with the instrument flying. However I initially forgot to check whether I was actually ‘on fire’ or not during the emergencies section. I think because I knew I was going to have to demonstrate entering an auto, picking a field, getting a Mayday call out, doing the touch drills and telling the passenger to “Brace, Brace, Brace” that I forgot to actually look for smoke and verify that I was indeed on fire. Later on I did a decent job of the governor off, limited power and hovering manoeuvres but my engine off to the ground was not my best work. I left the commencing of the flare about 10 feet too late and ended up with not quite long enough to fully level the aircraft before touchdown. As a result we slightly bounced on the back of the skids and fishtailed a little as we slid along in the mud. It was perfectly safe but I know I can do better, plus the skids needed a wash afterwards!

Overall it was a really fair test and as we landed back on the pad after an hour and 48 minutes in the air I felt relieved it was over. Although it had been a far from perfect flight, I also felt happy that I hadn’t made any huge gaffs and I had done my best. As I came to the end of the shutdown checklist Ric looked at me and said the magical words… “I’m pleased to tell you that you’ve passed. Well done.”

At that moment I think all I could say was, “Thank you!” It didn’t seem real yet, but I had done it! We completed the post flight paperwork and went for a debrief during which Ric told me I had flown a good test and there wasn’t much to discuss, which I think you have to chalk up as a win.

I’m extremely aware that while this is a big milestone in my career, I am still an inexperienced pilot and there is a huge amount I have yet to learn. I intend to use my newly acquired licence to continue to refine my skills as well as gain lots of new ones. I hope you’ll continue follow my journey on my YouTube channel.

If you’re about to do your test, I wish you the very best of luck. Do your prep, know your emergencies, make sure you have flown recently so you’re not rusty on the manoeuvres and above all stay cool. Think like a captain and I’ve every confidence you soon will be.