Ever since I began my flight-training course on the helicopter I’d hoped I would get the chance to fly the London Heli Lanes.
I knew the views of the capital from the air would be something special and having ticked this particular item off my aviation bucket list yesterday I can confirm it didn’t disappoint!

The heli lanes are a series of very specific helicopter routes which enable pilots to transit through and operate safely within the London control zone. As you can imagine, with Heathrow and London City airports plus Battersea heliport on the Thames as well as several other airports like Denham, Northolt and Fairoaks all in close proximity the airspace is extremely busy. Add that to the fact that you’re flying over a very densely populated area with several tall buildings – it’s not something to be taken lightly – especially in a single engine helicopter.

That said, with good communication with Heathrow ATC and by accurately following the prescribed routes at the correct altitude, they be flown safely and legally. From the pilots perspective it’s pretty high workload, certainly some of the busiest I’ve experienced so far because there are so many things to monitor and do simultaneously. 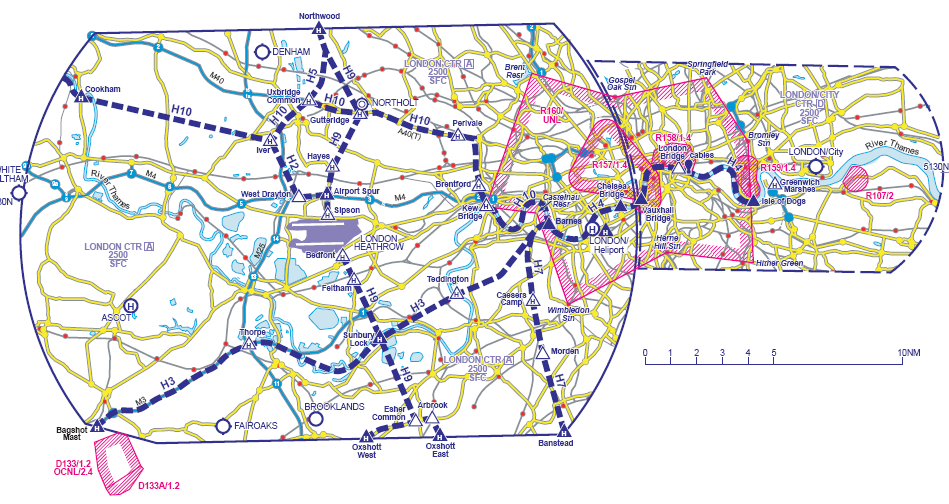 I began by planning the flight meticulously, much of which I was able to do at home a few days before the flight. This included reading the AIP and Pooleys guide pages for the heli lanes, revising the Heathrow crossing procedures and studying the route to get the turning points and relevant reporting points clear in my mind. Google maps in satellite mode is especially helpful at this stage. It’s worth getting familiar with the bridges across the Thames, especially some of the key ones like London Bridge (next to the Shard), Chelsea Bridge, Vauxhall Bridge (next to the MI6 building), The football stadium at Barnes and the Isle Of Dogs, which is the furthest East we flew on this trip.

We decided to fly down to Elstree, located just to the North of the London control zone, top up with fuel and start the heli lanes flight from there. Elstree was busy when we arrived but the FISO was very helpful and got us across the runway and parked up pretty quickly.

As soon as we had left the Elstree ATZ I was keen to get my initial call into Thames Radar but the frequency was very busy. There’s very little distance between Elstree and the edge of the control zone too, which didn’t leave me much time to get my bearings and pinpoint the Northwood reporting point which is where H9 begins at the zone boundary. I had focussed so much on the lanes themselves I don’t think I thought about this short but important part of the flight enough and that was a mistake as it meant I became saturated for a short spell right when I needed to focus on my radio calls.

We orbited in the area outside the zone a few times until I was able to find a gap in transmissions and get my call in to ATC.

As part of my planning I had already called the tower and passed the details of my route, aircraft and time estimate but the controller still asked me to ‘pass your message’ so I gave the details of my intended route again over the radio. I had this noted down in my kneeboard to make it quicker. 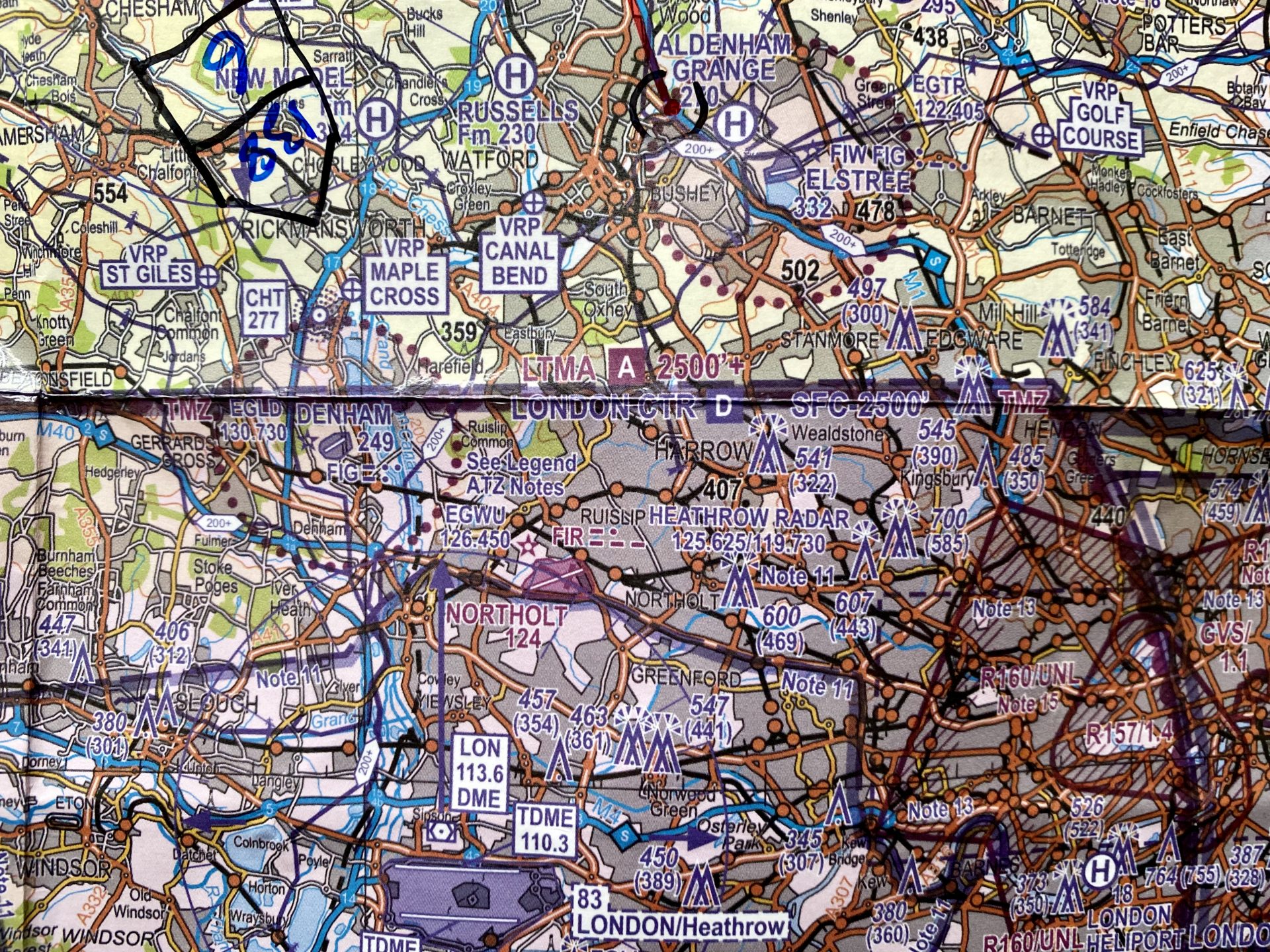 Once we were given clearance to enter via Northwood at the standard operating altitudes – which are clearly marked on the heli lanes chart – we got stuck in.

Everything happens very quickly when you’re flying on this chart because it’s 1:50,000 scale. Once inside the zone we were told to switch to Northolt Approach for the transit through their ATZ. They then handed us back to Thames Radar once we were established on H10 towards Perivale.

These switches were reasonably simple, as the Heathrow controller had passed our details to the Northolt controller. We were also lucky in that after Gutteridge, we were cleared all the way to the Isle Of Dogs via H10 and H4.

Despite these helpful aspects, there’s still a lot to do. You need to make sure you’re right over the correct route line, turning accurately at the right points and once on the river, staying to one side to let opposite direction traffic pass you. We had a couple of West bound R66 helicopters pass close by us as we approached the Vauxhall Bridge. You can see one here in the top left corner.

The ‘standard operating altitudes’ range from 2000 feet down as low as 800 feet so you have to be on the ball about initiating a climb or descent in good enough time so as to be at these altitudes by the set points. Most of them are a ‘maximum altitude’, so I aimed to be either at them or no more than 100 feet below.

For the section between Perivale and the Chiswick bridge you actually have to maintain the specific altitude which (when heading South/East) drops from 1200 feet down to 800 feet as you pass under the final approach paths for Heathrow runway 27L and 27R. 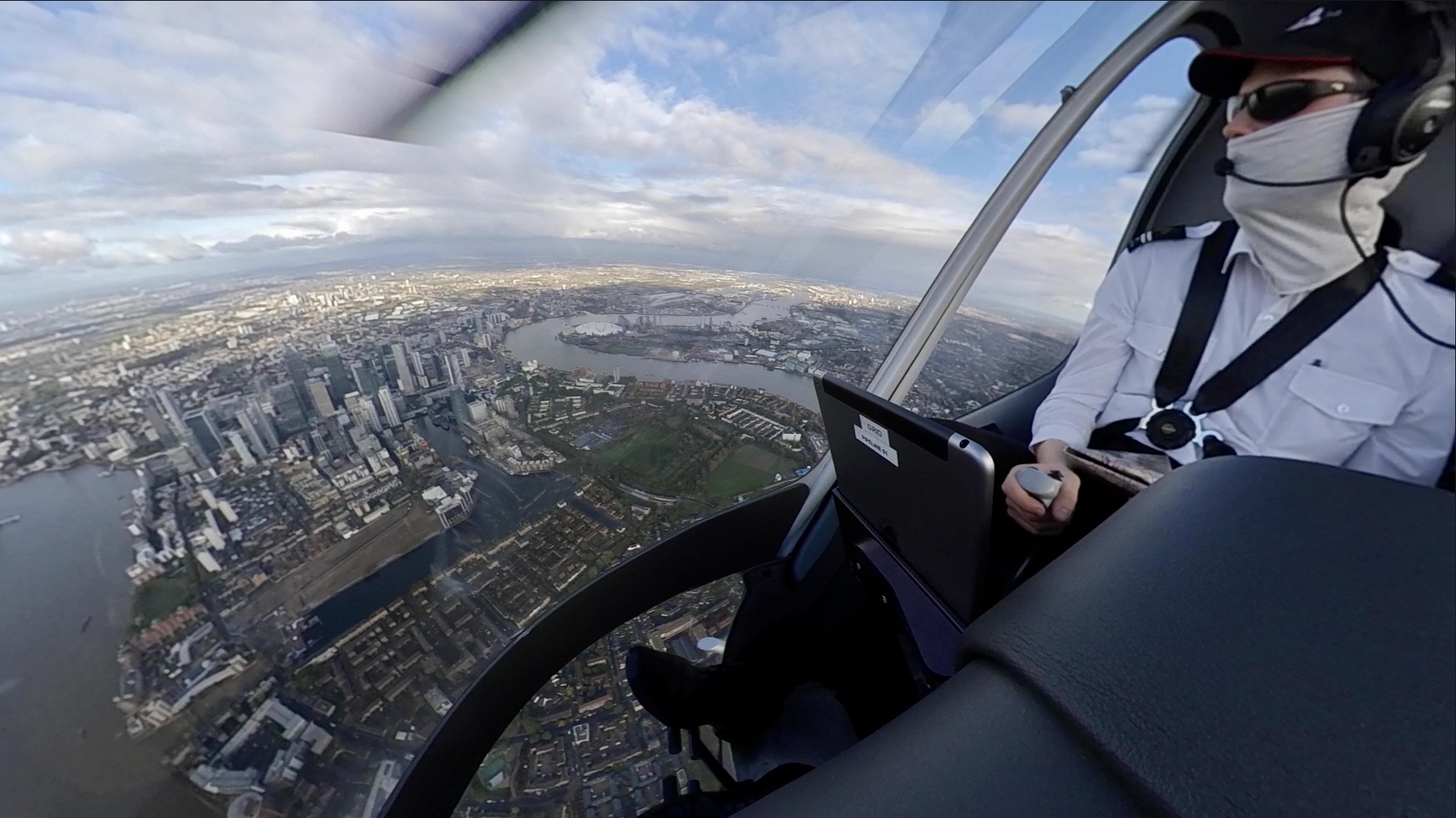 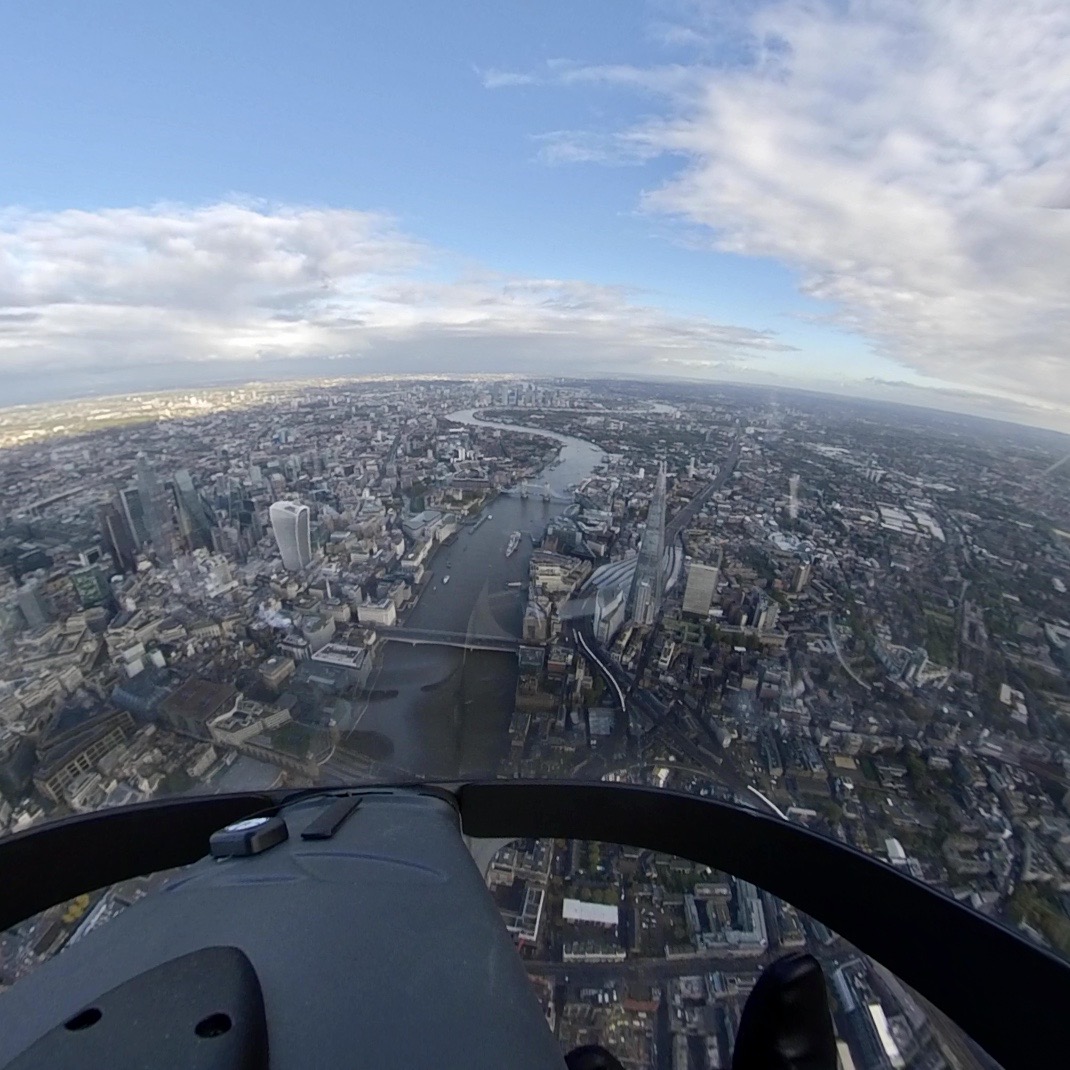 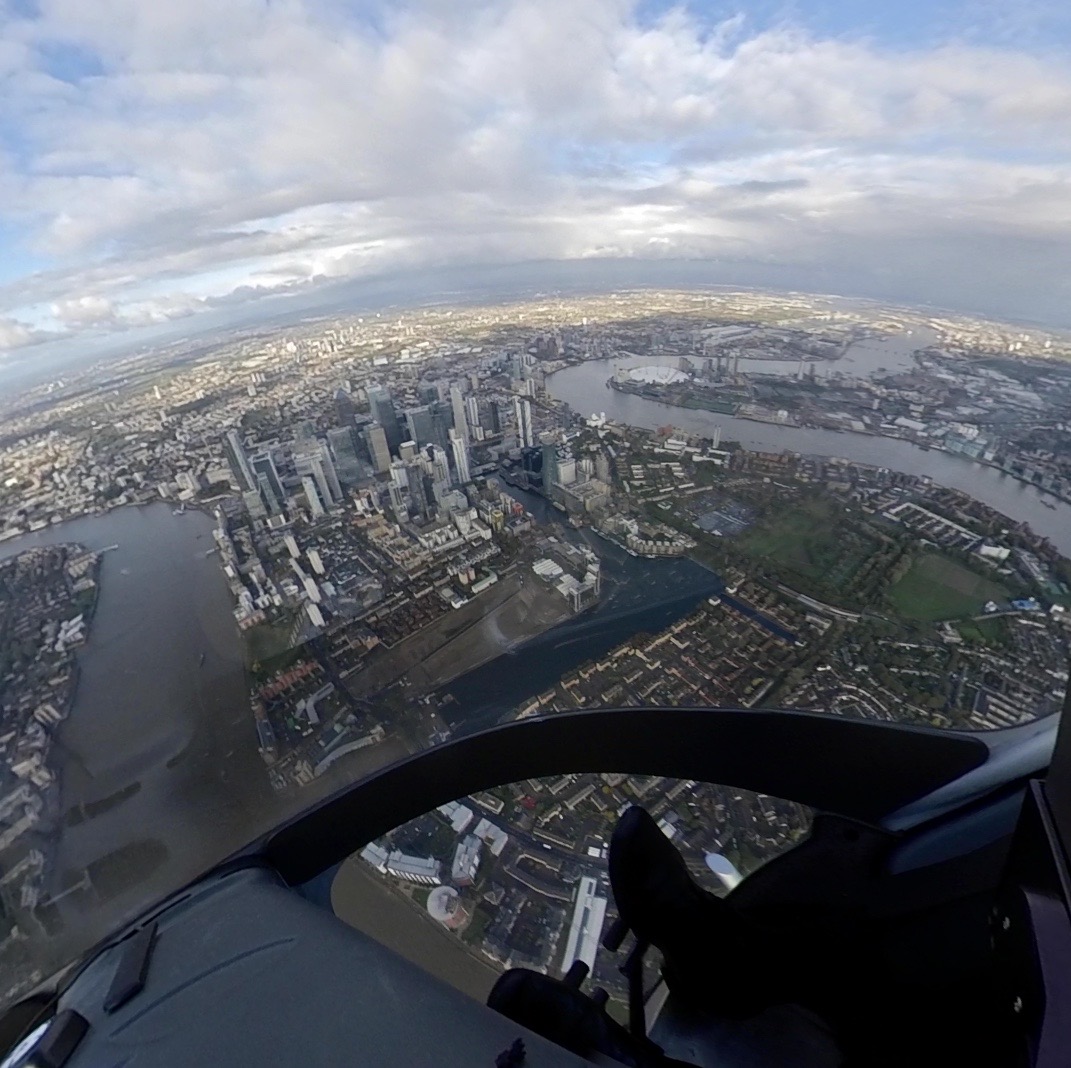 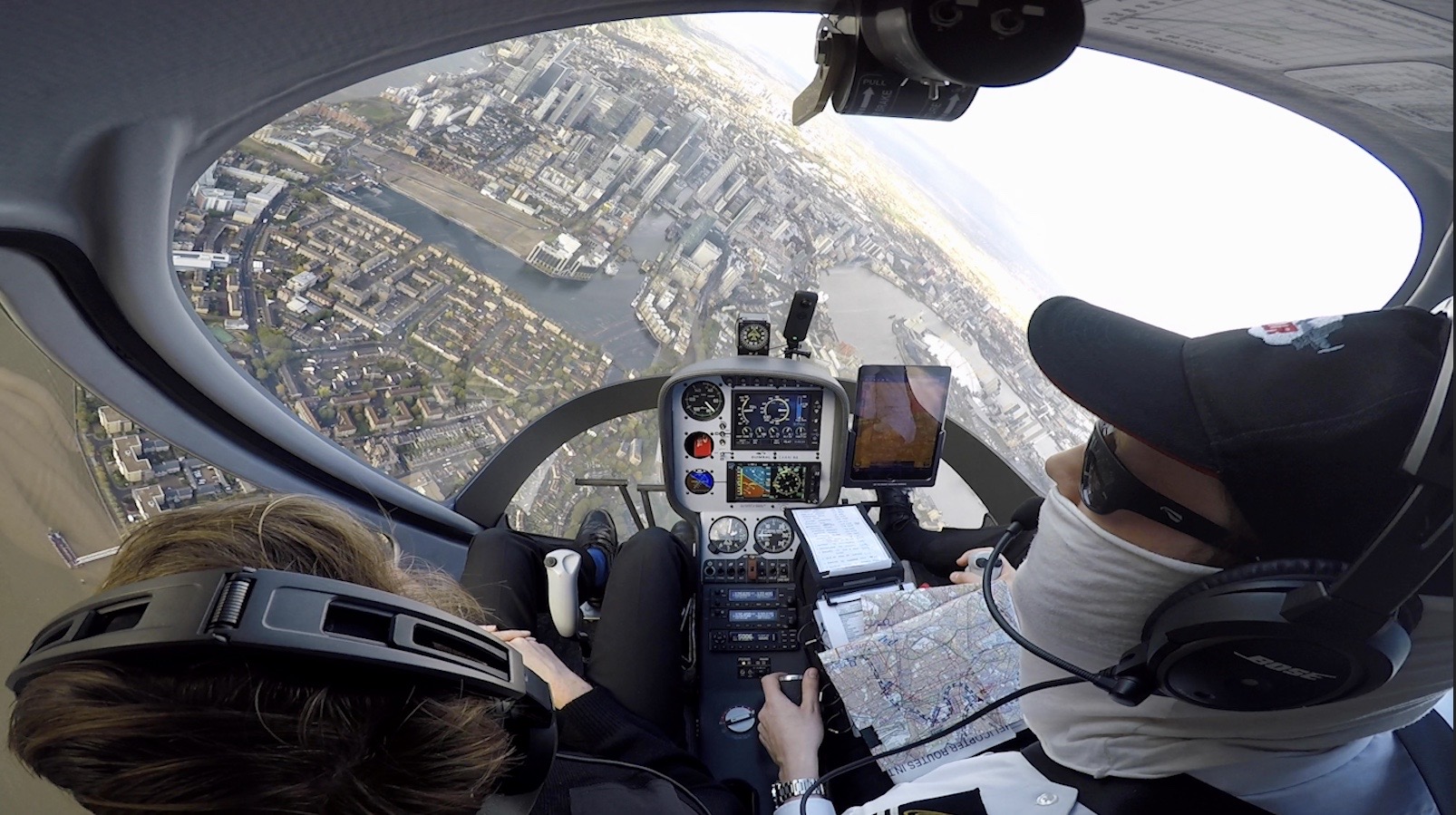 I was so focussed on trying to fly accurately, look out for traffic, monitor the radio and keep an eye on the engine health that I wasn’t able to drink in the views as much as I’d have liked. However, I did have my 360 camera setup to capture the action so It’s been great to look back at that. I lived in London for 18 months in 2010/11 so it was very cool to see some of my old haunts from the air on a bright autumn day. 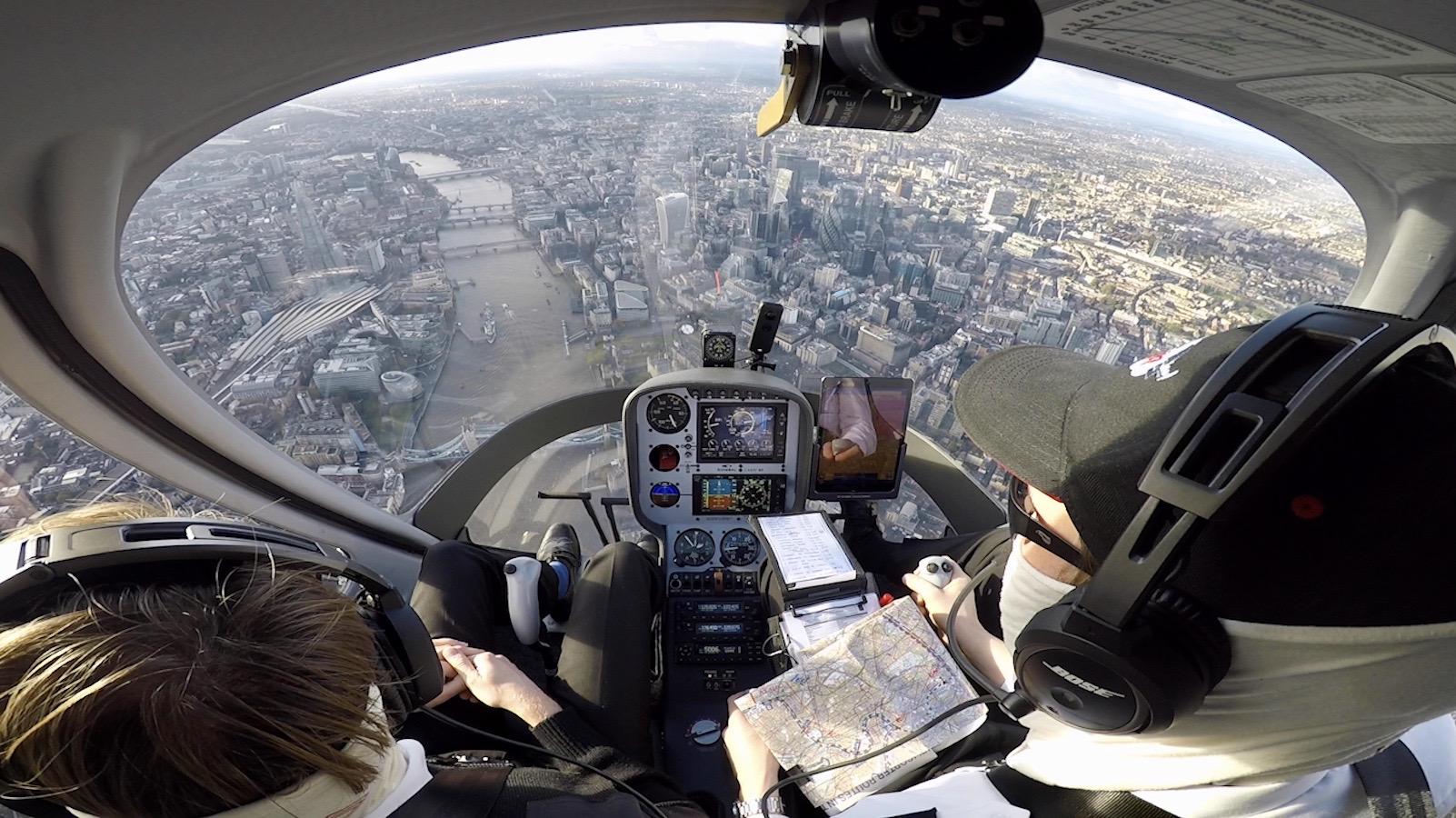 After retracing our route back along the Thames we peeled off at Barnes to route along H7 and H3. Once we reached Sunbury Lock, we turned due North and headed towards Heathrow.

It’s a massive site, quite amazing to see from 800 feet. As they were using runway 09L for arrivals and 09R for departures we routed around the West side of the field, via the Stanwell, Terminal 5, Longford and Sipson holding points. 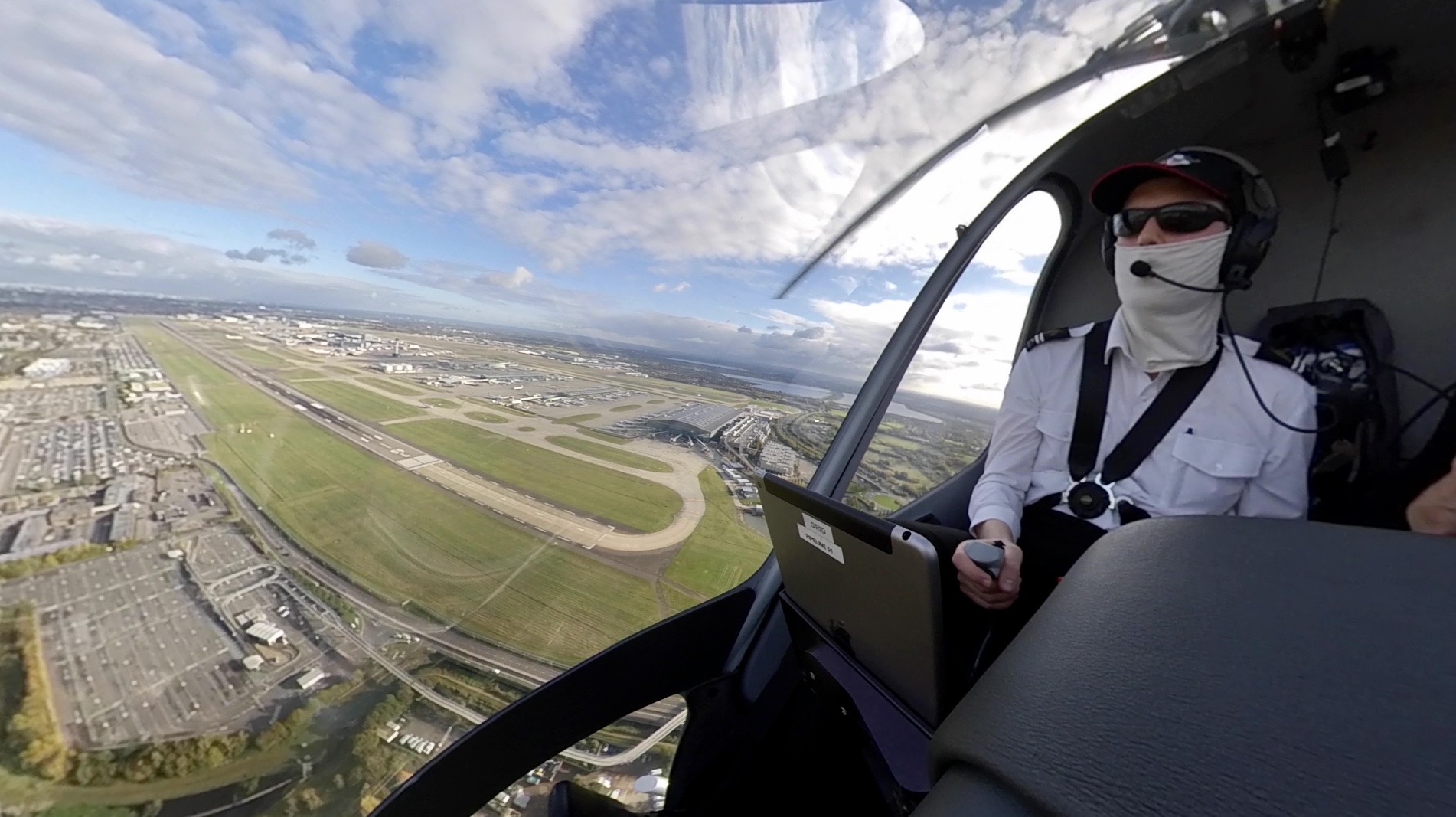 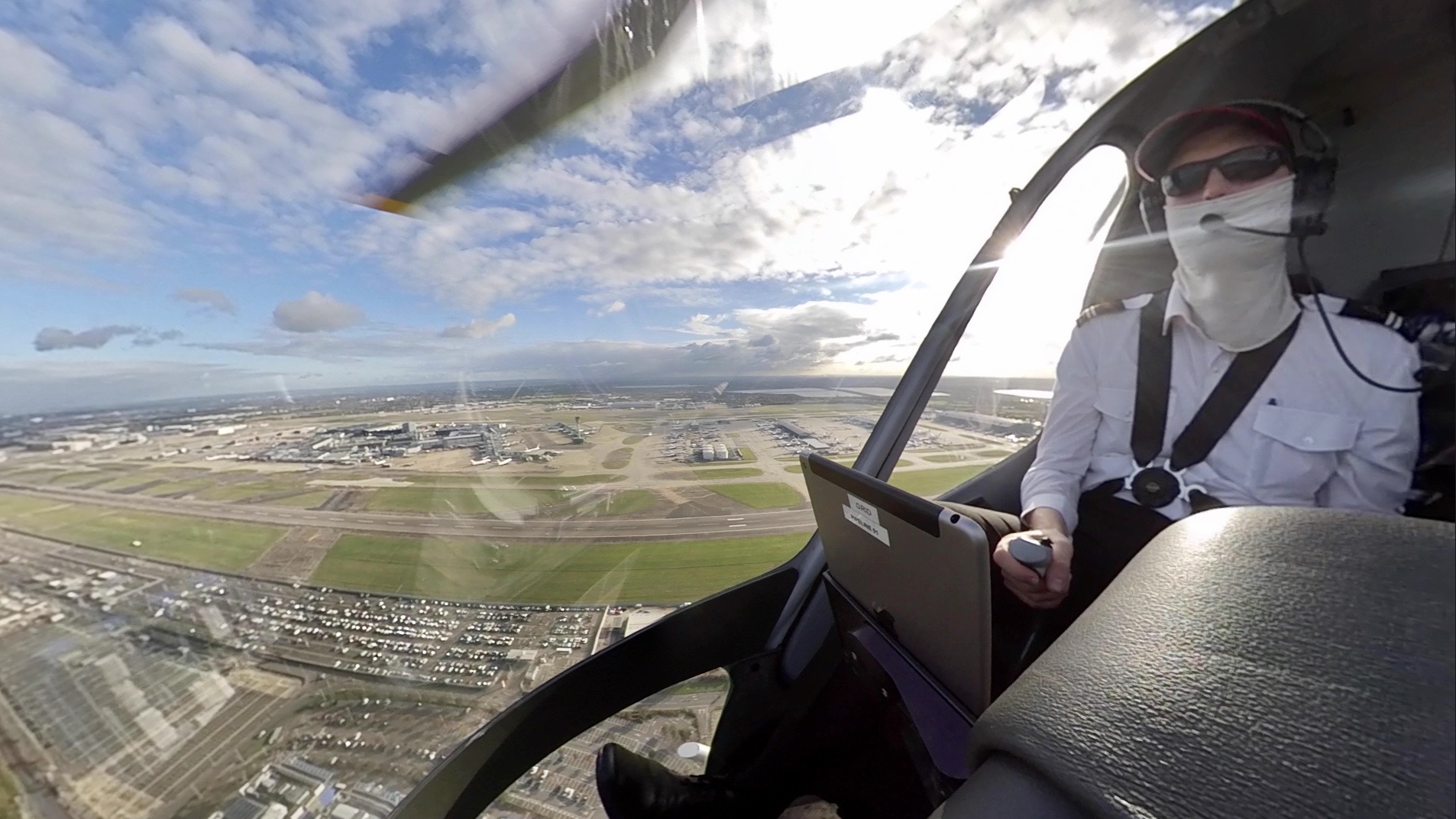 We then routed back up H9, over Northolt and out of the zone via Northwood.

It was a fabulous experience and definitely something I’d love to do again. If you’re a helicopter pilot (or know someone who is) and you get the chance to do the lanes, I’d highly recommend it.

When I do it again I would definitely like to have either an instructor or another pilot with me who’s done the lanes before as there is a lot to do and a bit of help changing frequencies, spotting traffic and refolding the chart goes a long way. It is challenging flying, but it’s totally achievable and I feel a real sense of accomplishment having done it.

I hope to produce a video from our trip, so don’t forget to subscribe to Rory On Air on YouTube and turn on notifications. 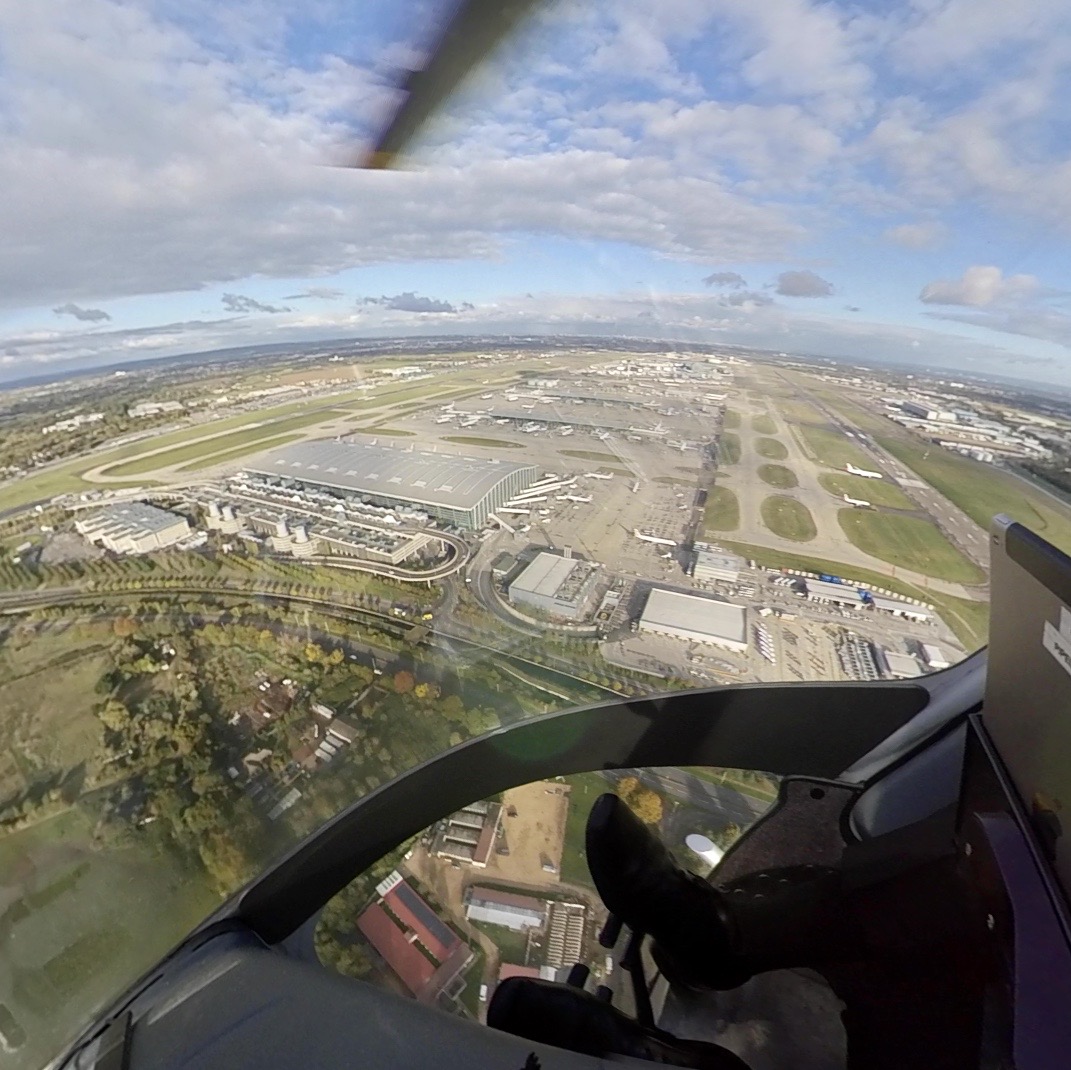