Reviewing my freshly updated website, an old pal of mine commented; “It’s great – albeit a rather random mix of skills!”

Thinking about it, I had to admit she was right. Helicopter pilot, audio producer and YouTuber – it’s certainly eclectic.

I grew up on a small remote Scottish island inhabited only by my parents and two younger brothers. We didn’t have a TV until I was about 13 but we always had radio.

I remember being given my first radio as a boy. It had a handle you wound up to charge it. This clever design meant it never ran out of batteries but I’d often be singing along to a song when it would suddenly fall silent. It had run out of spring and needed rewinding.

I spent a lot of time listening to the radio and programmes like The Archers, Dead Ringers and the Today programme were never missed in our house. 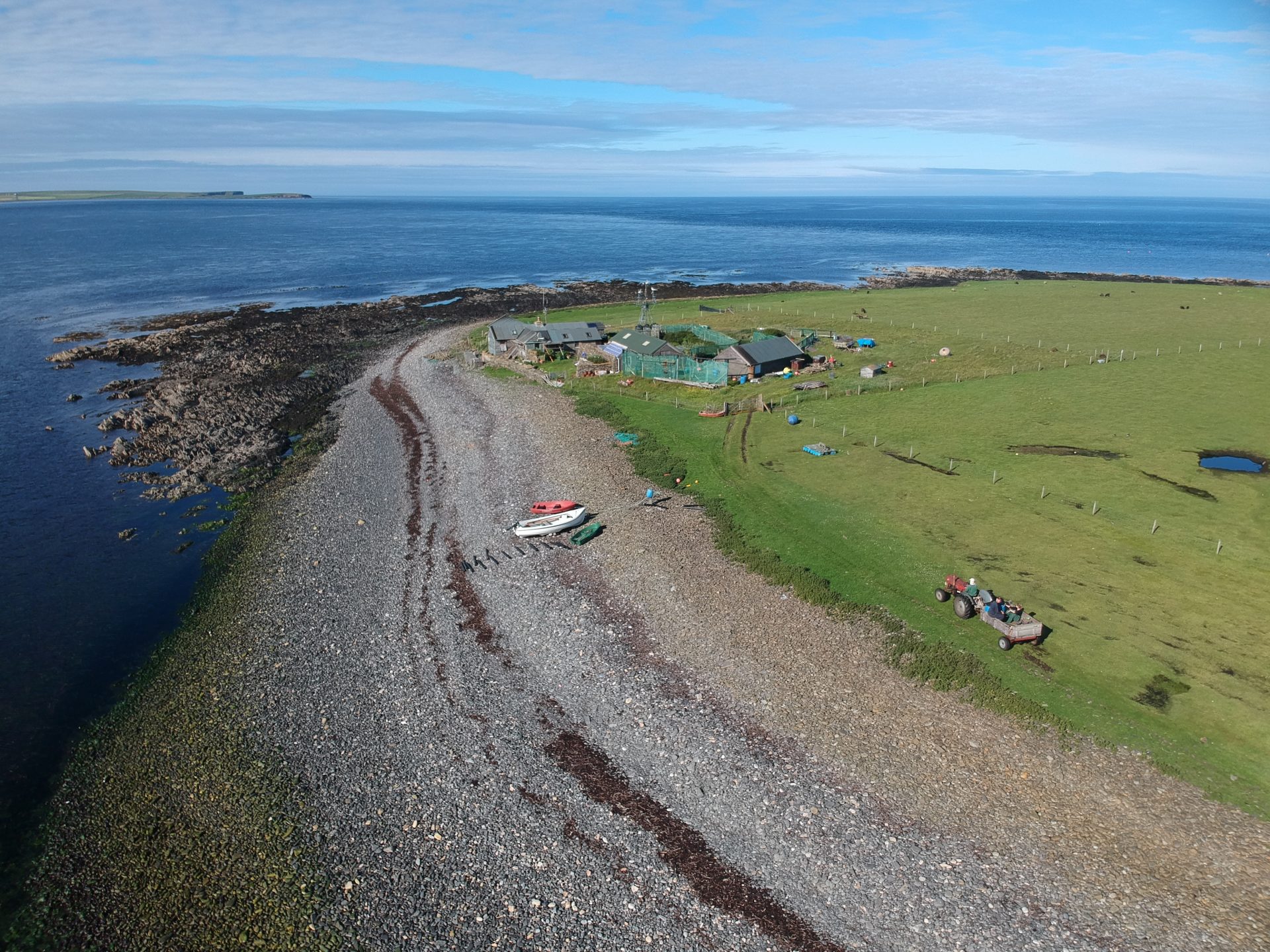 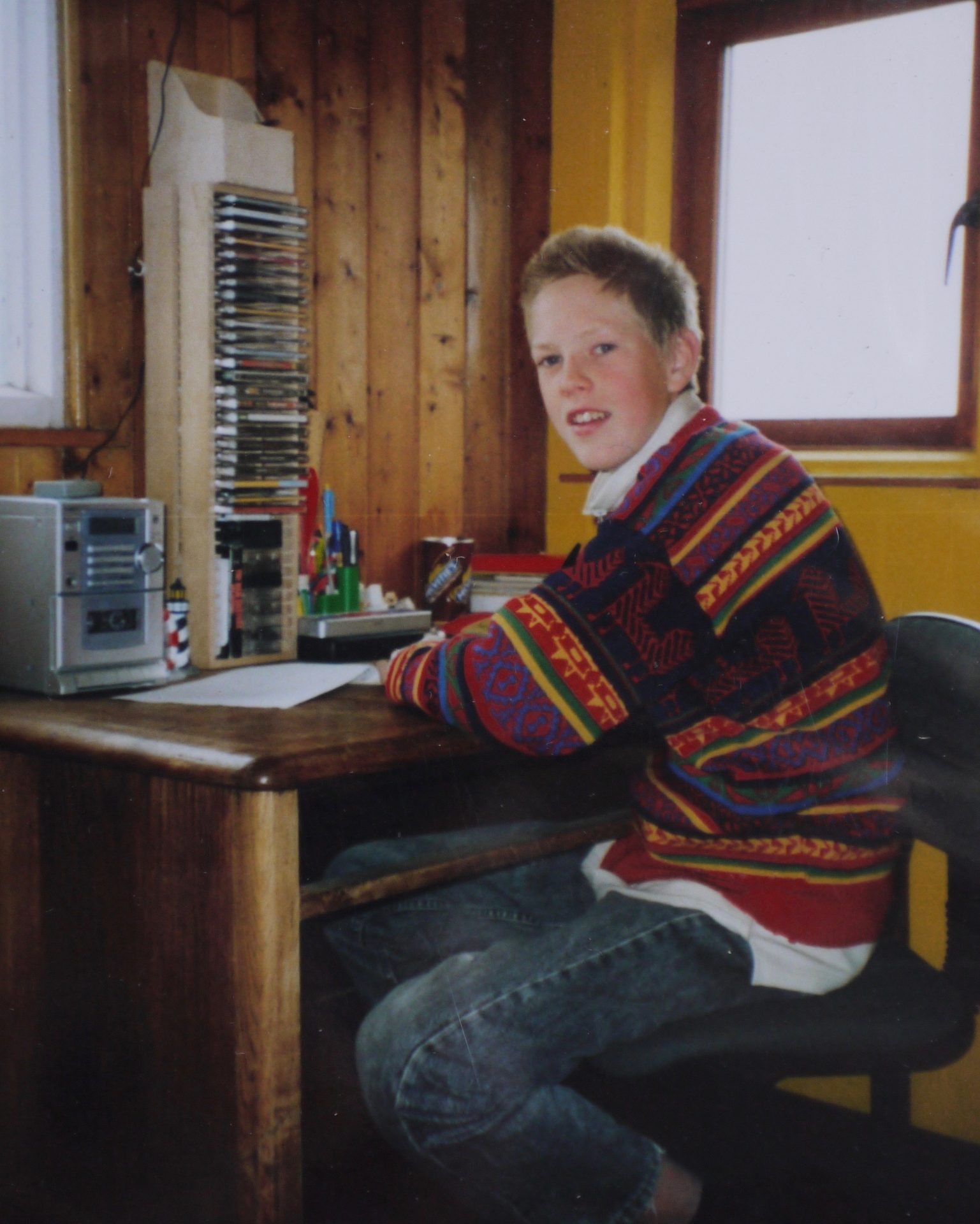 I had a cassette recorder and would make my own shows by taping songs off the radio and talking in-between. When I was a bit older and we got our first computer I taught myself how to edit audio.

Later on, with a better microphone and a CD burner I was able to make neater shows and send them to my cousin in Bristol who would reciprocate. It was good fun and I started to pay more attention to the technicalities of how the proper radio presenters did things.

At the age of about 14, we all decided it was time mum stopped home educating me on Auskerry, and that I should attend the Grammar School on the Orkney mainland in preparation for exams.

During the week I stayed in a school hostel in Kirkwall with all the kids from the other islands that had primary but not secondary schools. At weekends they would go home on the inter-island ferries but as they didn’t sail to Auskerry, I would travel home for the weekend on a small pleasure boat skippered by a family friend.

These trips took two hours on a beautifully looked after wooden boat called ‘Creole’. I was often allowed to steer and I always had a good conversation with Smith, the skipper. I do miss those boat trips, even the ones when the sea was really rather rough! 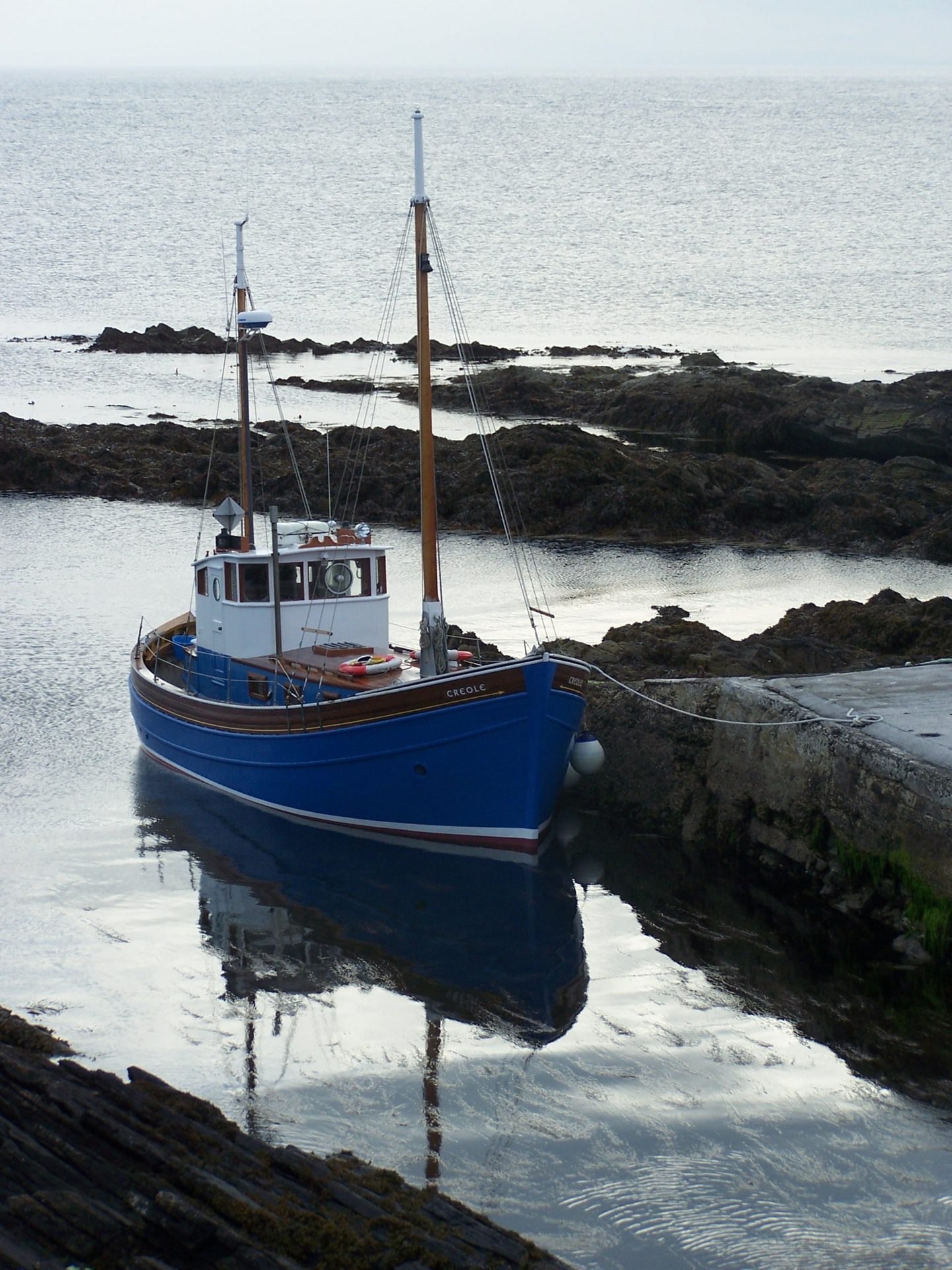 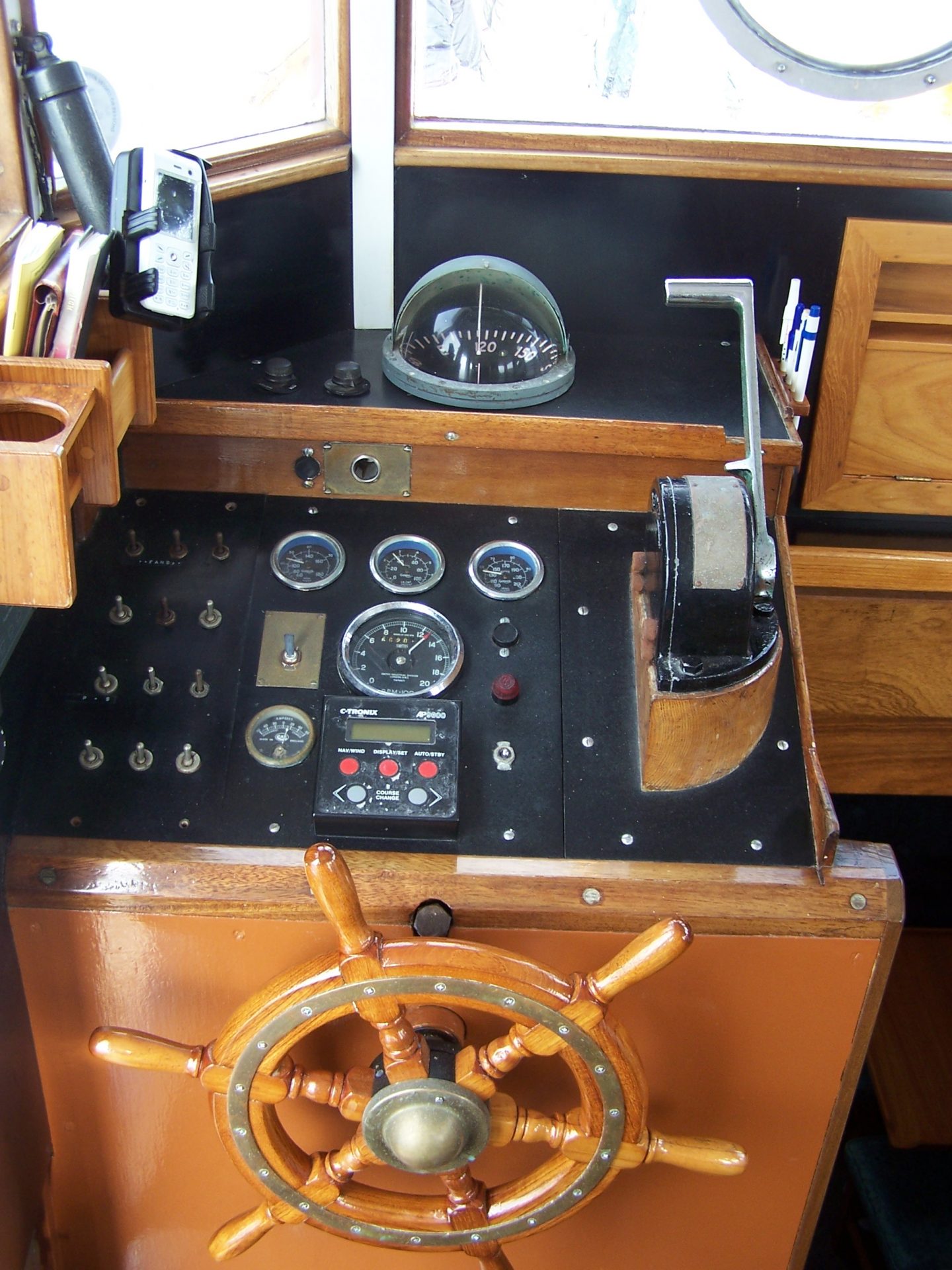 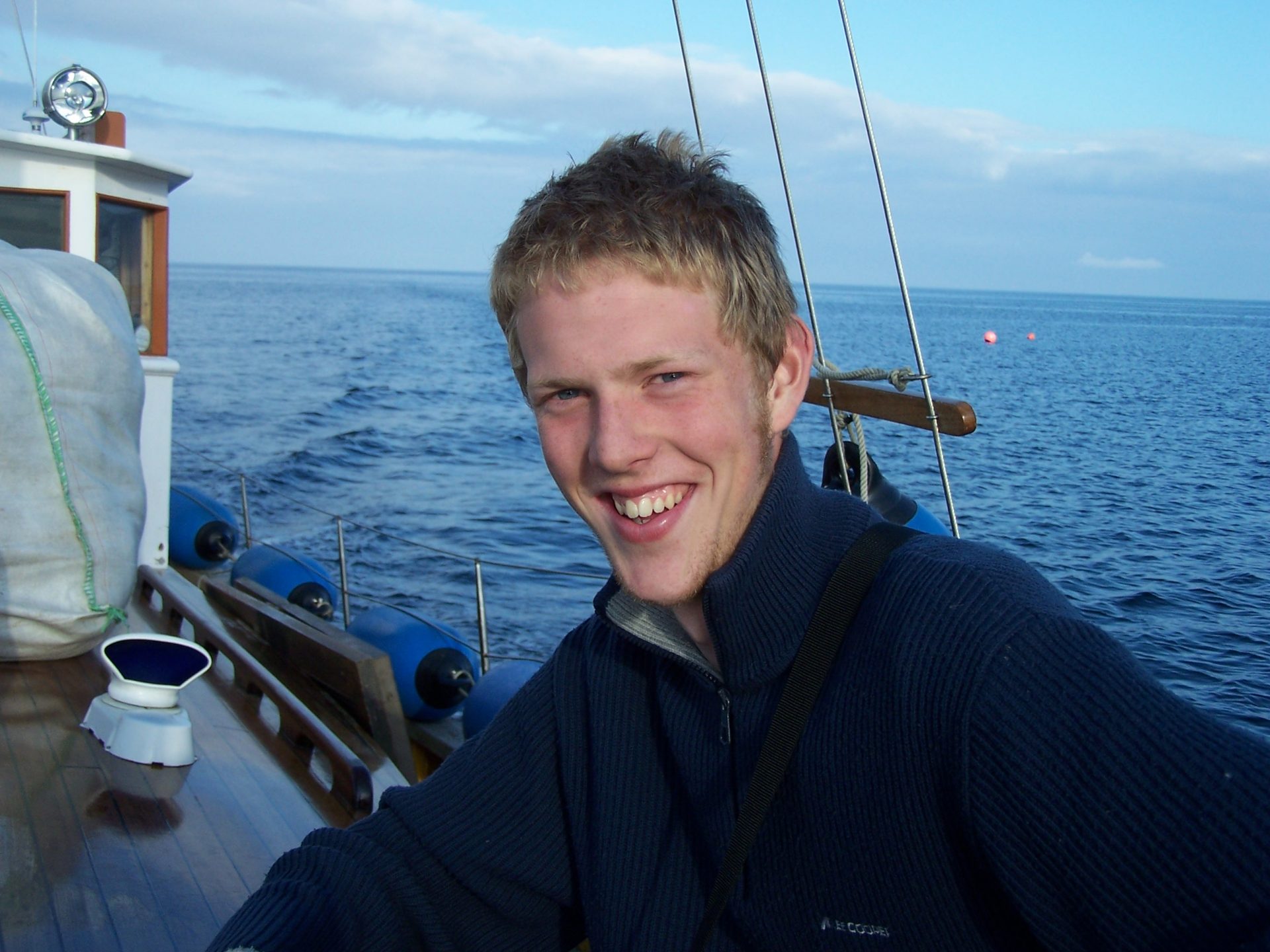 As you will know if you’ve read my ‘helicopter obsession’ post, I have wanted to be a pilot since I was about six years old. After explaining this to the school careers advisor at the age of about 16, it was made clear to me that the only realistic way to achieve this lofty dream was to join the military. My parents are sheep farmers and although I had never wanted for anything as a child, they were not well off. By this point we were spending part of the year living in Kirkwall – Orkney’s population centre – so I was able to use the landline after school to call the RAF recruitment line.

I remember the conversation, as it was quite a turning point in my life. The nice lady on the desk asked me if I had any medical history including asthma – which I had to say yes to as despite having grown out of it by now, I had suffered quite badly from it as a child and it was plastered all over my medical records.

The lady then asked how tall I was. “Six foot four”, I replied. “Well I’m sorry”, she said. “We can’t take you I’m afraid. Asthma is a no no and you’re too tall anyway because if you had to eject from a jet you’d lose your legs under the console.” “But I want to be a helicopter pilot and you can’t eject from those or you’ll lose more than your legs”, I replied in typical smart arse teenage way. She said something about rules being rules and the conversation ended politely shortly after.

I was disappointed but all was not lost as I had grown up around the sea, I loved ships and knew the Navy used helicopters so I found a number – in an actual paper phone book – and called them. The response was almost identical. To their credit, the Army didn’t seem bothered about my height but the asthma was a red flag for them too.

Within the space of 15 minutes, my career plans – and more importantly my dream of becoming a helicopter pilot – were in tatters. 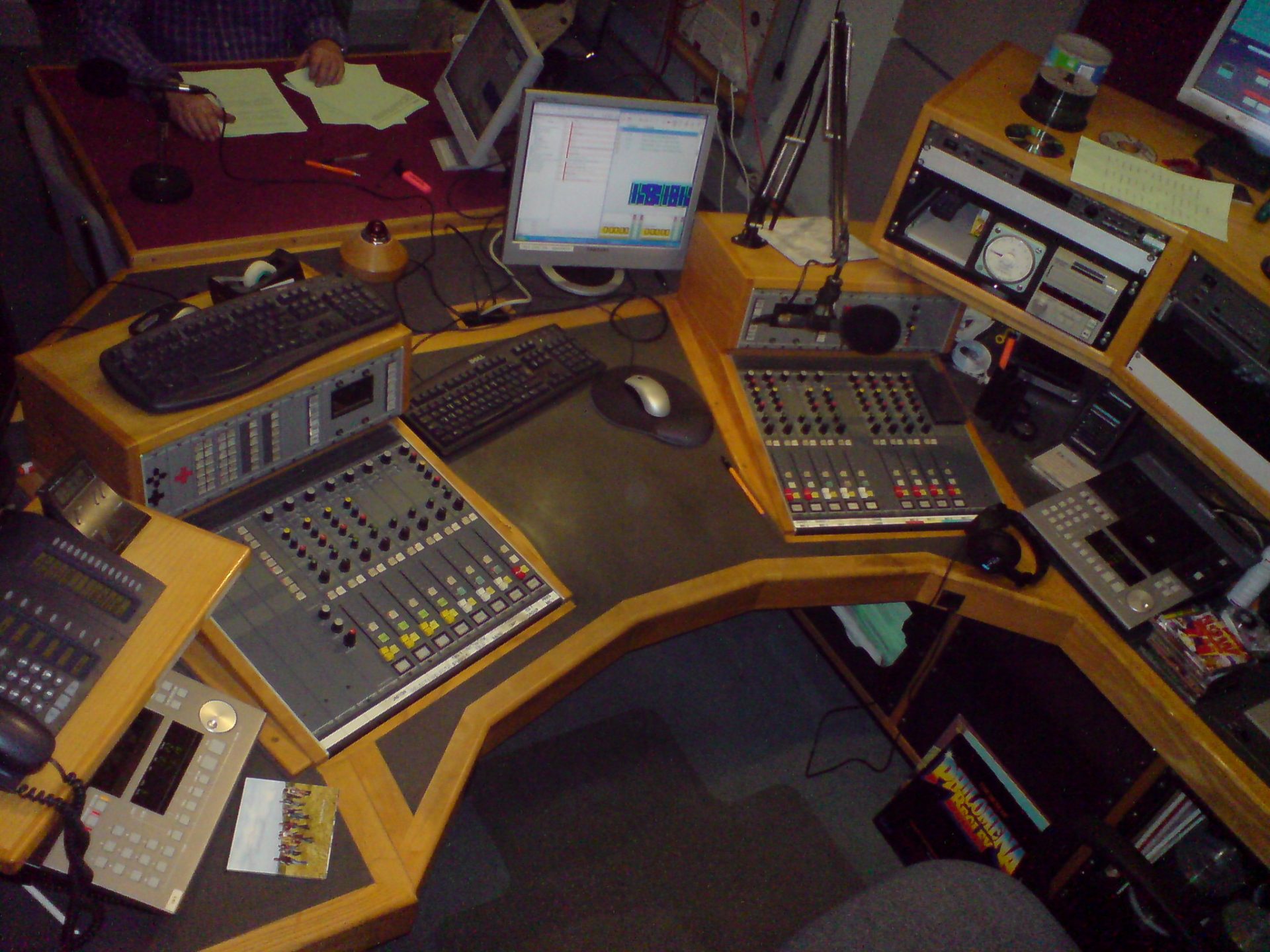 Extremely fortunately for me, I had by this stage already started volunteering at the local BBC radio station in Orkney.

One wet and dark November Friday evening I had walked in off the street during their annual seven hour Children In Need appeal show and asked the first person I saw if there was anything I could do to help.

It had sounded so busy and fun as a listener, and as the station was only an eight minute walk from my house I thought I’d just go along and see what was happening.

Luckily for me the person I’d asked happened to be the boss, who rather than telling me to clear off, invited me up to the studio and invented a job for me right in the heart of the action.

I was hooked and spent most afternoons at the station after school doing my best to be helpful. Fast forward to a few years later and I’ve finished university having got a first class honours degree in TV & radio production.

I’m back in Orkney working full time at BBC Radio Orkney doing everything from recording interviews, reading the news, mixing packages and trails, driving live programmes (some from the side of a lorry) and even presenting my own music shows. It was a fantastic job and a brilliant training ground and I am hugely fortunate to have been given so many opportunities.

I was freelance and although I had full time work I wanted some security so when a job came up for a Studio Manager working on Radio 5 live in Manchester I decided to submit my first ever job application. 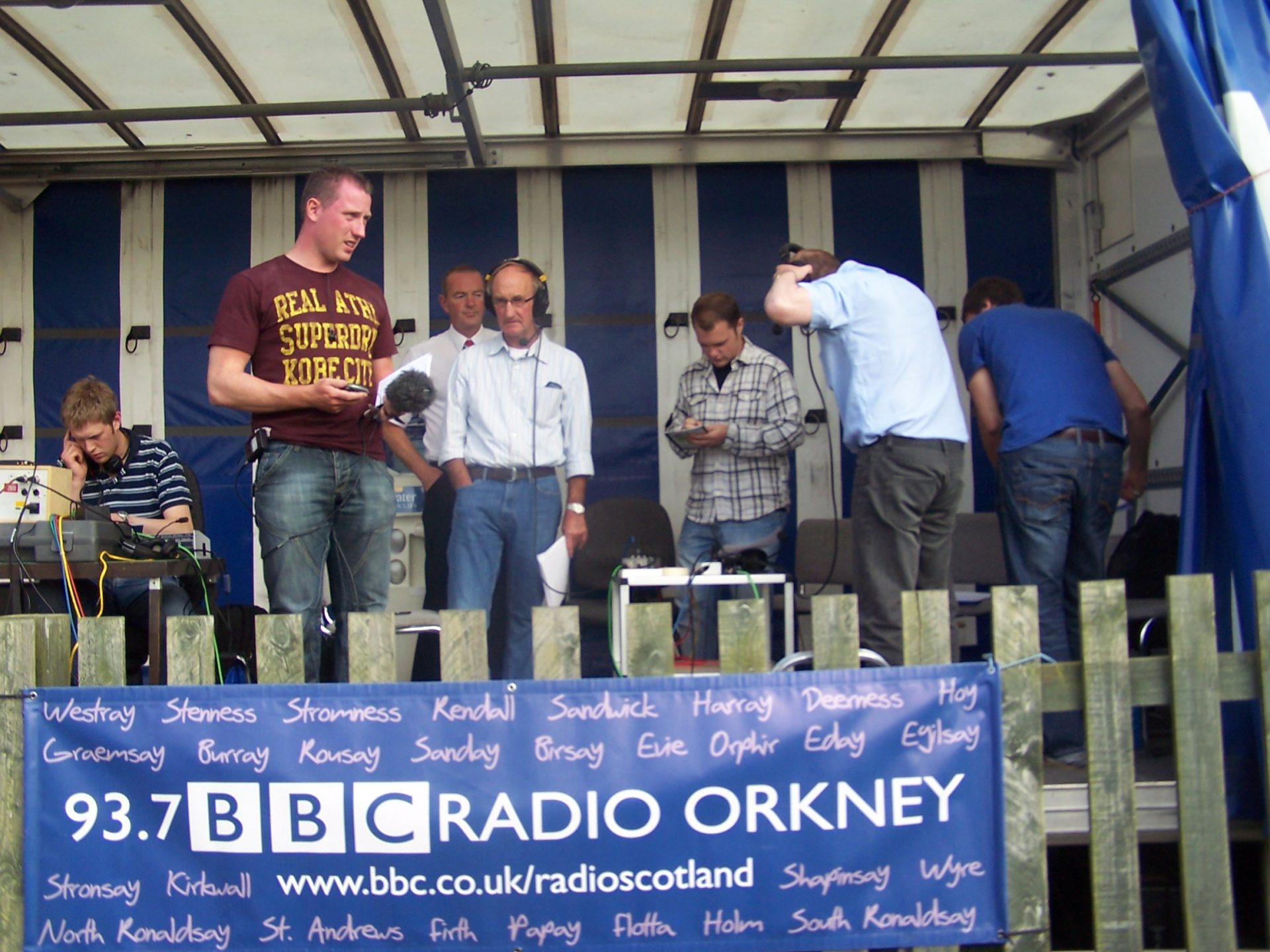 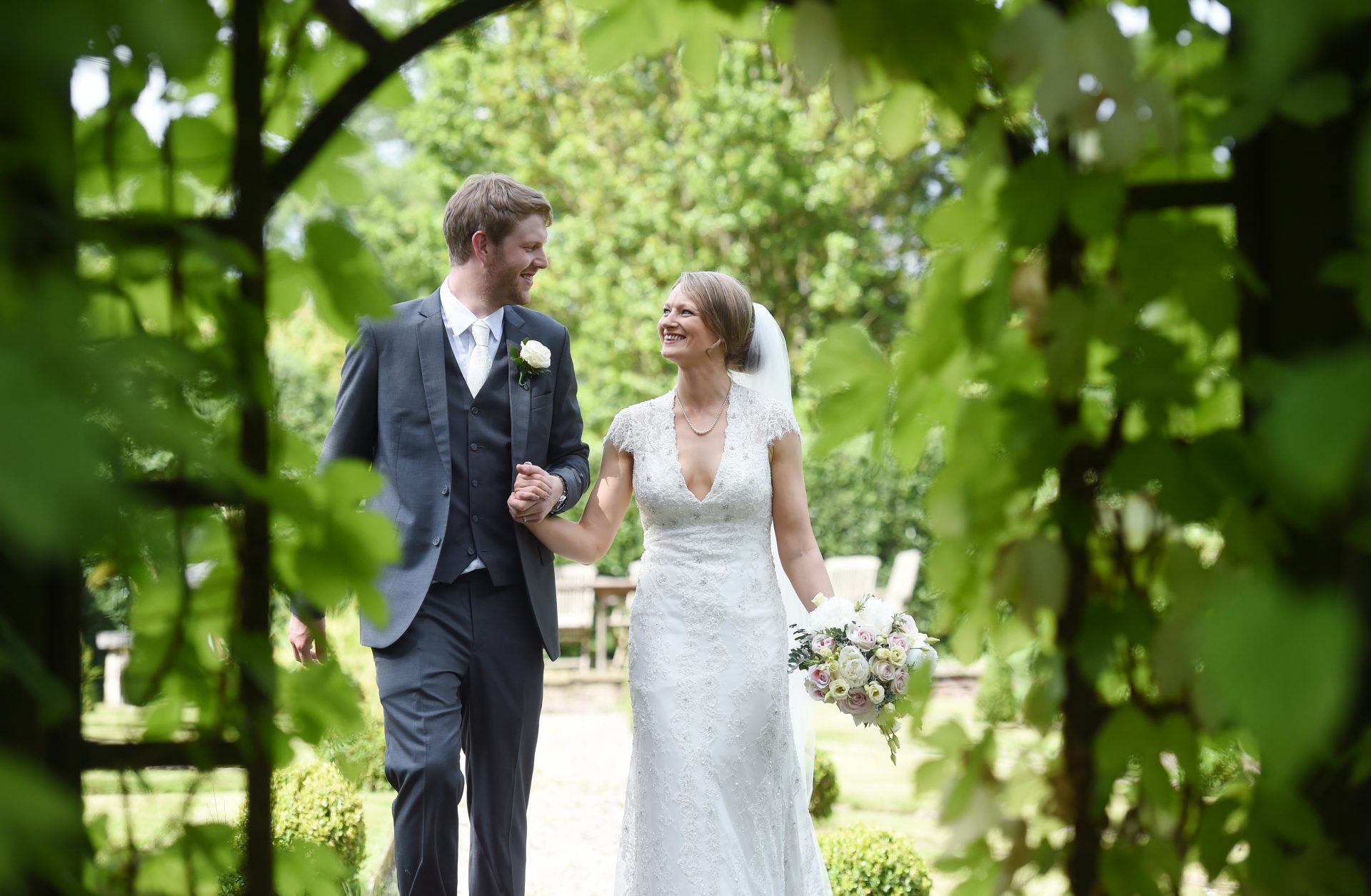 A few months short of a decade later, having met my wife Lizi, moved to Manchester, bought a house, got a microlight pilots licence and settled into a comfortable life as a Technical Producer at the BBC in Salford Quays I saw an advert for a full time commercial heli training course.

The six year old wannabe helicopter pilot inside me was awoken again and after encouragement from Lizi, I drafted an application. I really didn’t expect to be called, but I felt that at the age of 32 I had to give it one last shot.

Pictures: There I am in S11 at 5 live, about to ‘panel’ (mix) a live show. Leanne, Al and Jack all started at the BBC on the same day as me so we quickly became firm friends. This was taken on my last day working at 5 live. 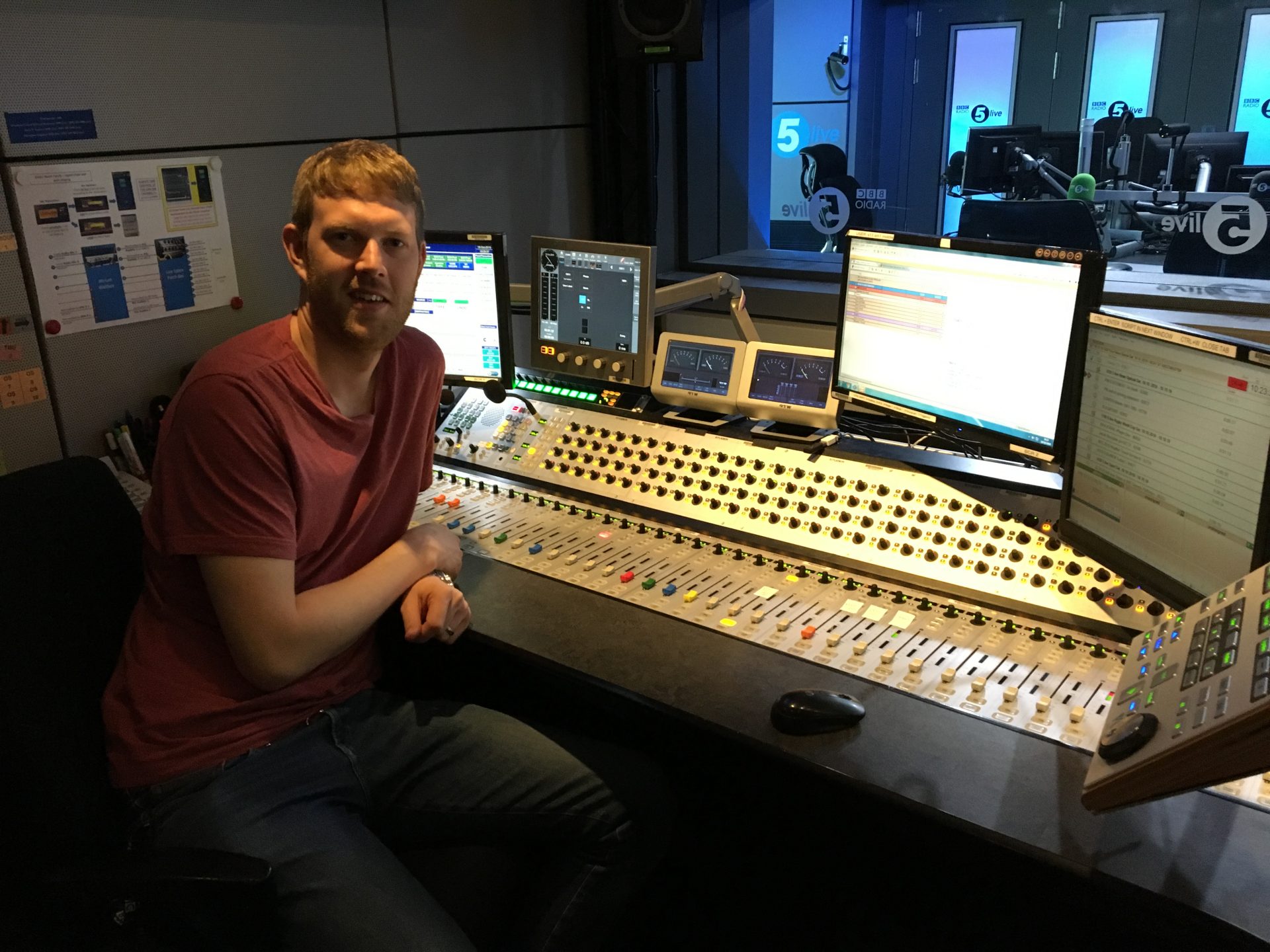 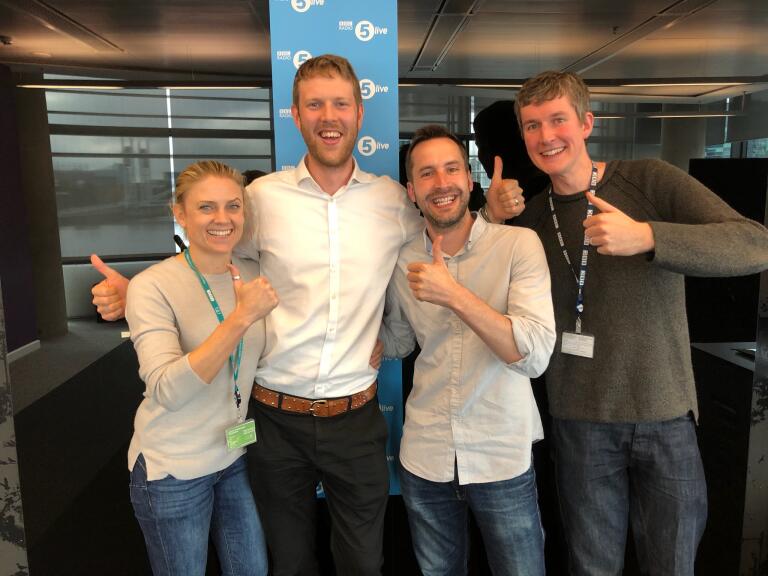 Almost a year later I’m about to sit the last four ATPL exams having already passed 10 of them.

I hope to have enough hours and ability to pass a flight test in December, which if I do, will see my qualified as a commercial helicopter pilot before the end of 2020.

There is a lot more work to be done but I’m making progress every day and I’m extremely lucky to be working towards a goal I’ve had for almost as long as I can remember.

Picture: Here are the eight of us on the integrated course, pre covid, outside the hangar with some of our instructors. They asked one of us to climb up on the rotor head… 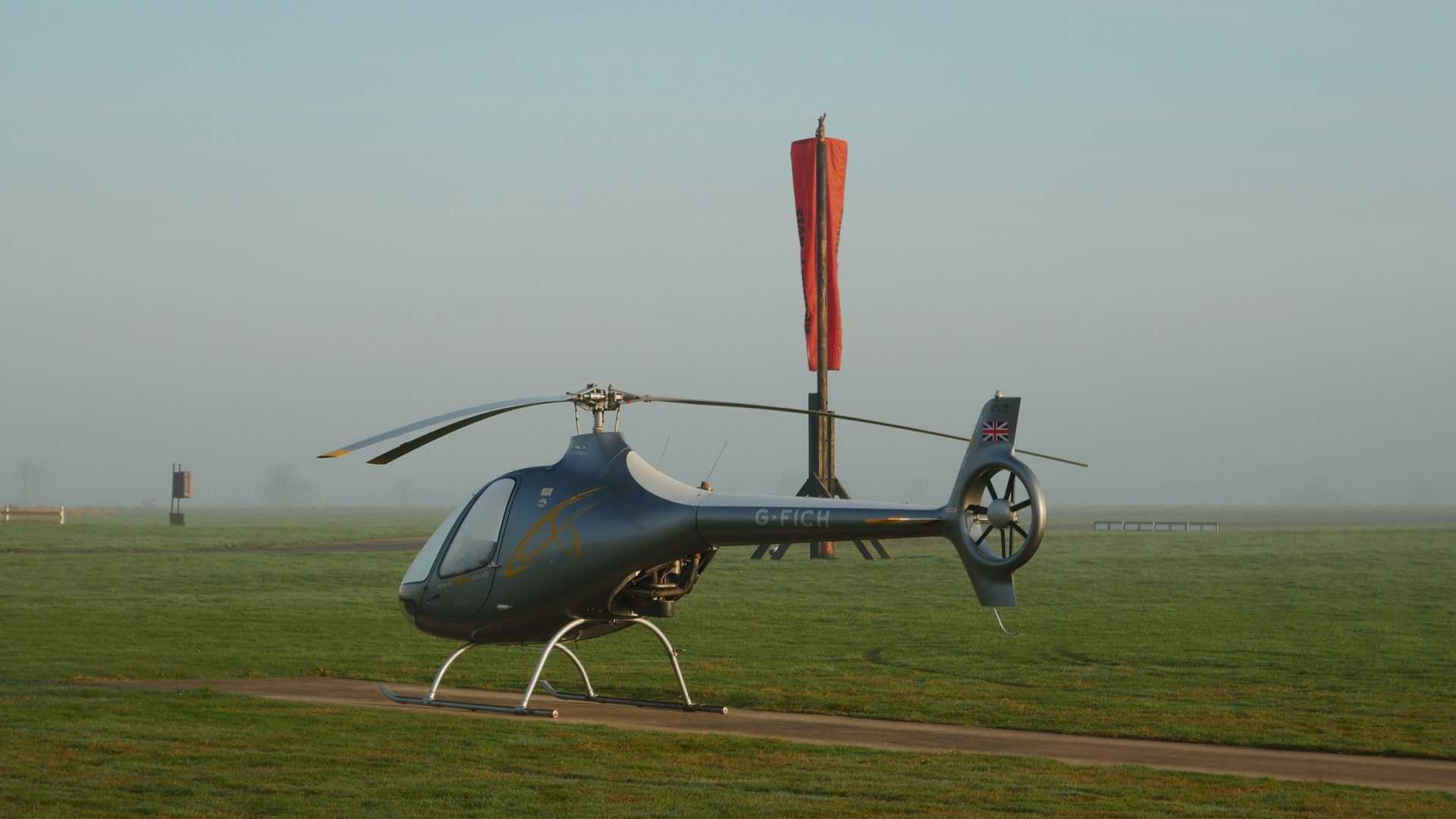 So, I love radio, podcasts, music, sound mixing, presenting and production and have worked either freelance or as staff for the BBC for over 15 years. I will always love the buzz of being live on the air as well as crafting a creative podcast mix.

I also love aviation both rotary and fixed wing. That’s why I’m now doing my best to combine them both through my YouTube channel and various freelance audio projects I’m working on while studying.

My friend is right, it is a bit of a random mix of skills but variety is the spice of life isn’t it?